I have always tried to teach my children to serve others. To help those in need and to let people know how much we care in different ways then just telling them.
When my boys were younger I know that friends would say 'I can never get my children to do anything, they only whine and complain and then I just do it.' . I would always think to myself I am a lucky lady. Sure they might whine or want to wait just one more minute and in veritably if I needed them they would do it.
I have often wondered if what I was trying to do succeeded. I had a few confirmations over the years. Such as the time when I took my parents on another province road trip so they could visit friends that where celebrating 50 years of marriage. We were all staying at one hotel and my parents had a cabin to themselves. At the time they were early 80's late 70's of age. When my oldest son saw their bed he knew there was no way they would be able to get into it easily so he went and asked for another mattress so that it was easier for his Grandma and Grandpa.
Well recently we have been taking care of our neighbor's yard. She went into the hospital this past year about October and hasn't been home since. The few times it snowed we made sure to shovel her driveway and now with summer we are mowing her lawn. Well I should say my daughter is mostly mowing her lawn. Now I will fully admit she grumbles about doing it. But she does do it. What really showed me recently though that her servant's heart was growing was when a couple of friends stopped by to visit while she was mowing. One of them asked her if she was getting paid to do it and she replied no. The friend then said what a rip off I won't be doing it then. Sarah said I don't mind that's what neighbors do!! I don't mind her whining so much anymore when I know that she is not only growing herself but she is setting an example and teaching others to have more of a servant's heart.
It makes this momma's heart cup run over. :) 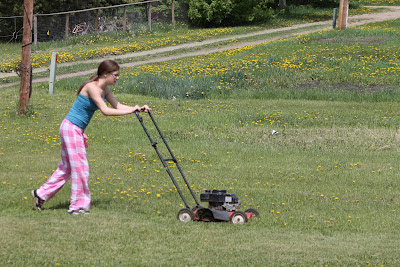 Did I mention how hard this job is. Her place is 3 times the size of ours and the front all has to be bagged. But she does it!! 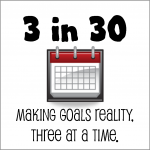